When we moved to North Carolina from Tennessee 18 years ago, I would frequently see this bumper sticker and not know what it meant. I looked it up a few times, but then would forget. You've probably heard of these places:  Nags Head, Kitty Hawk, Hatteras, and the setting for the Diane Lane/Richard Gere Nights in Rodanthe movie, based on the Nicholas Sparks book. 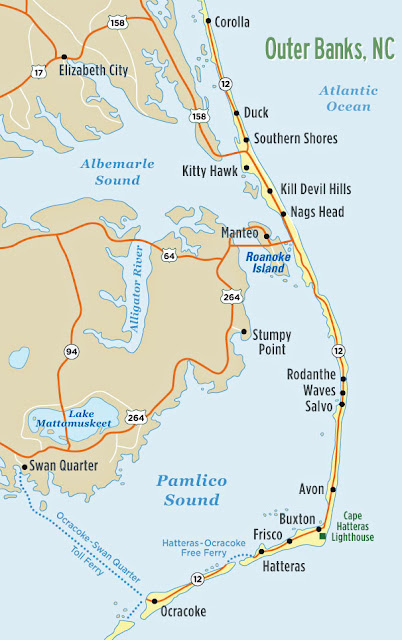 The Outer Banks (OBX) off the coast of North Carolina are barrier islands separating the Atlantic Ocean from the mainland, about a six hour drive from Charlotte. After years of vacationing at the more southern NC and SC beaches, Steve and I decided to visit there this past week.

We stayed in Nags Head on Hwy 64, at the Oasis Suites Hotel, which we chose for its central location. On Monday evening we had a delicious dinner at the nearby Basnight's Lone Cedar Cafe, owned by former NC State Senator Marc Basnight, and operated by his two daughters. Everything on the menu is fresh, local, and just-picked. We were told that soft-shell crabs are in season, so we tried them as an appetizer and really enjoyed, along with our entrees of fresh flounder and the seafood combo.

Tuesday morning we traveled south on Hwy 12, down that narrow strip of land that connects the islands and towns. At some points, the land is so narrow that we could see the water right next to the road on both sides. The week before Memorial Day turned out to be the perfect time to be there because tourist season had not really started so traffic was fairly light.


One of our first stops was at the Cape Hatteras Lighthouse. We didn't make the climb to the top, no regrets though. It is equivalent to a 12-story building, 257 steps to the top. I'm afraid of heights! I think I would have been okay as far as the trek up; there is a landing every 31 steps. Knitters are counters, so anything is achievable if you can stay on count, right?!

Next we drove onto the ferry to take us to Ocracoke Island at the most southern end. 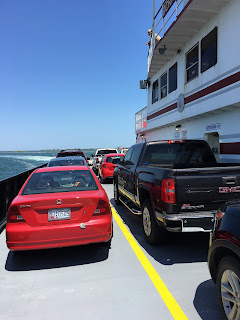 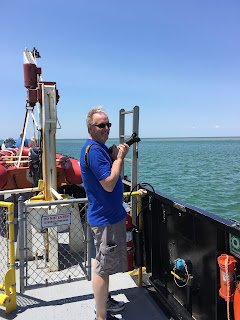 The ferry ride from Hatteras Island to Ocracoke took about 45 minutes. Being on a ferry with vehicles was new to both of us, and it was amazing. 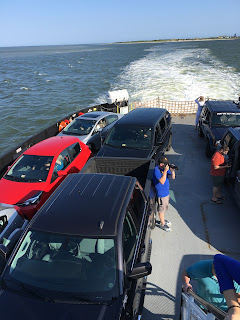 The village of Ocracoke was one of our most favorite spots. We had lunch at SmacNally's Waterfront Bar & Grill. Their hush puppies were the best I've ever tasted. Steve enjoyed a burger, and I had the buffalo shrimp special. Again, we walked right in, got the best table on the water, because the summer crowds had not arrived.

And the weather was perfect!

The Ocracoke Island Lighthouse was our next stop. It is tiny compared to the others, and visitors cannot go inside it. I'm glad we had the chance to see it.

After the ride back on the ferry to Hatteras Island, we back-tracked to Avon. We were so excited because this was our ultimate destination to visit our family friends, newlyweds Alexa and Allen. And boy have they had an exciting year! They moved to the OBX last fall, got settled, then were chosen to be on the FYI Channel's Tiny House Nation. They spent over a week in Chicago this spring with the cast and crew while their tiny house was completed, then drove it back to Avon behind their newly purchased truck.


Their episode will appear late summer/early fall, and I'll be sure to post the air date. The home is cozy, homey, and they are so happy with it. It's the perfect complement to their Travel Well Magazine lifestyle. Alexa rode with us to meet Allen at the Avon restaurant where he works part-time, Pangea Tavern. It was by far the best meal of our trip, we both agreed on that. We started with the daily catch mahi fish bites, then for our entree we both had the special blackened mahi-mahi over rice and beans. Absolutely amazing! Thank you so much Alexa and Allen for the tour and wonderful dinner and visit!

Driving back to our hotel later that night, we were about the only vehicle on the road. In spots it was very isolated and desolate, sort of reminded me of being on a rural Wyoming road.

Wednesday was our day to travel north on Hwy 12. First stop was Duck Donuts! That was fun, they customize your donuts as you order. WooHoo, I just googled it and found there is a franchise in Charlotte, 14.9 miles from our house!

We needed the energy to hike up the hill at the Wright Brothers National Memorial in Kitty Hawk. 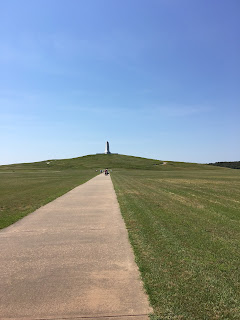 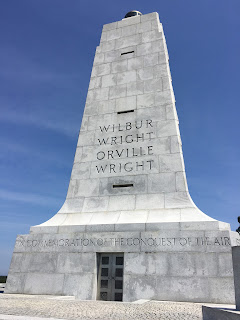 Next, my GPS navigated us me to a yarn store I had been told about (with a nice bench outside for Steve to wait). 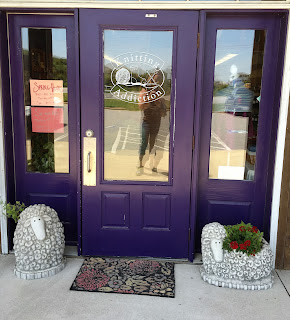 The Knitting Addiction in Kitty Hawk is probably the best LYS I have shopped in. It's spacious, modern, and stocked with all the most popular yarn and accessories that we see on Ravelry. There was a resident cat under the staircase and The Yarn Truck, a mobile LYS, parked in the back parking lot. I was able to pick up a couple of skeins of souvenir yarn and breathe in some yarn fumes before continuing down the road.

Next we drove to the Waterfront Shops in Duck. We walked along the boardwalk on the Sound, enjoying the views. Really a cool spot. Plenty of walking! 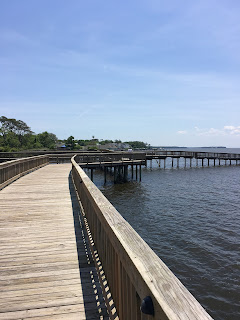 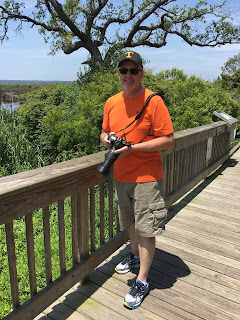 Lots of shops and nature, all together in one location. There was the most wonderful independent bookstore called Duck's Cottage Coffee & Books with a great selection of beach reads and novels with stories taking place in the Outer Banks. The staff left little notes around the store on certain books with their comments, and that so appealed to me. Author Mary Kay Andrews was doing a book signing there today, wish I could have met her. We ate lunch at the outdoors counter at Coastal Cantina, featuring a Tex Mex menu (quesadillas and fish tacos) and a soundfront view. 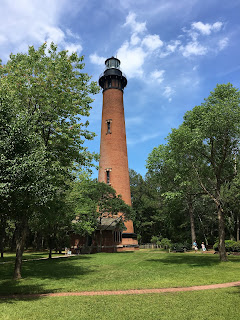 The Carrituck Beach Lighthouse is 10 stories and also open for a 220-step climb to the top (nope, we didn't attempt it). There was a lovely souvenir shop on the grounds too.

Right down the road at the very north end of the island was the most amazing thing!

The Corolla Wild Horses. We drove right onto the beach (a 4x4 is required). 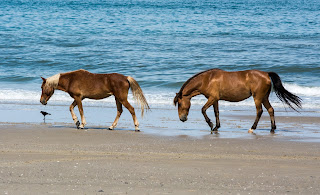 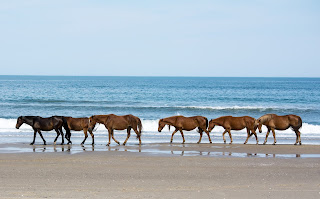 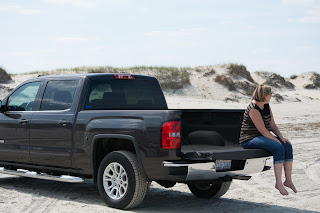 The horses seem pretty tame, yet many look rough. I have so many questions about what they eat, do they have shelter or vet care, etc.?

Whew, the day is not over, we really jam packed in the sightseeing!

On the way back down Hwy 12 to Kitty Hawk, we stopped briefly into Trio, a wine-beer-cheese retail shop recommended by Allen, where we picked up some custom souvenirs. And Trio just happens to be next door to the Knitting Addiction LYS where we stopped earlier!

We made a very brief stop at Jockey's Ridge State Park to see the giant sand dunes. By this point, we had walked a ton so we were not keen on hiking up a sand slope.


. . . the Bodie Island Lighthouse. It had the most beautiful grounds of all, with a breathtaking boardwalk out to the marshlands. It was the most fun to photograph. 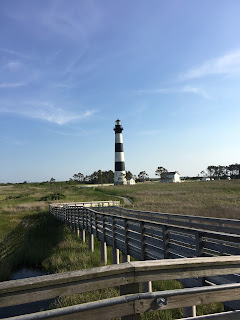 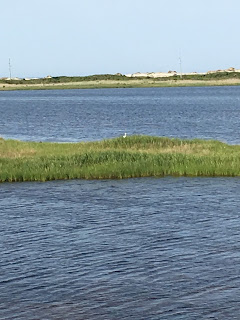 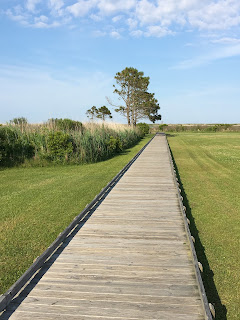 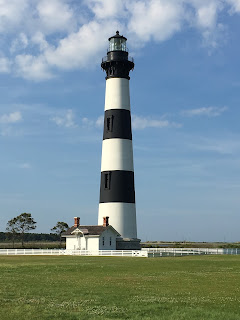 Finally, we headed straight to dinner, another al fresco meal, at Stripers Bar & Grille in Manteo, the kind of place where diners can drive up in their boats and dock by the restaurant. Steve tried a soft-shell crab sandwich, and I had their caprese salad and blackened scallops. 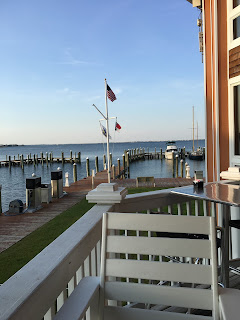 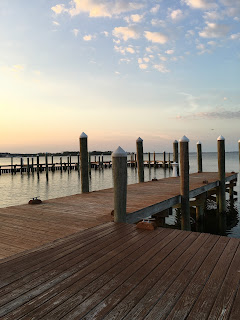 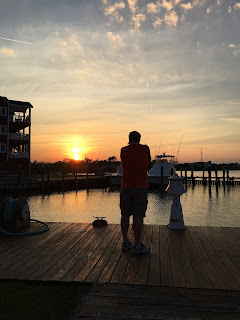 If you're still reading this, I hope you aren't bored to tears. It was mostly to document memories for myself.

We planned very little in advance for this trip. Other than a few restaurant suggestions, we figured out everything else on the go, and found the islands very easy to navigate. All of the lighthouses were free admission (it costs a small amount if you want to climb to the top), the ferry and driving on the beach were free, and about the only site we had to pay admission to was the Wright Brothers Museum.

Before this vacation, I had never really thought much about lighthouses, but now that I've seen these four distinct ones, I am absolutely in love with them. The National Park Service and State of North Carolina have done a really nice job, and I hope you'll have a chance to visit here someday!