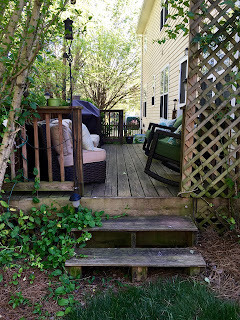 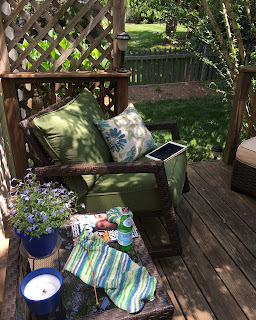 The space is nothing out of the ordinary, but I have spent many delightful hours there alone reading and knitting, and with my family and friends talking, eating, and laughing.

The deck was in desperate need, though, of a sprucing up. In our climate, we can pretty much enjoy this outdoor area 10 months of the year. I missed having a table and umbrella for when we grill (which is nearly every evening!) 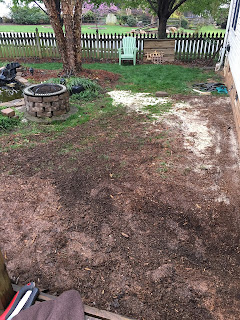 3-18-2017
So we decided to add a stone patio area off from the deck to give us extra room. It's Steve's do-it-himself project, but he had lots of helpers. 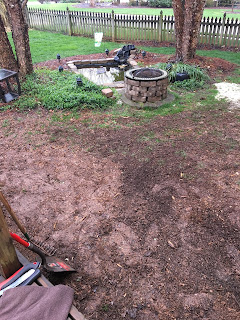 The area was prepped and leveled. 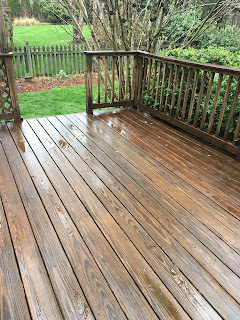 We had the deck power washed. 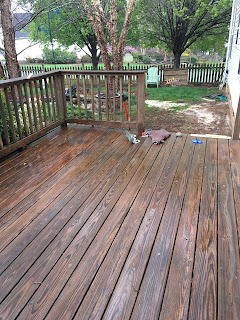 Steve has since given it a beautiful coat of rich chestnut brown stain. 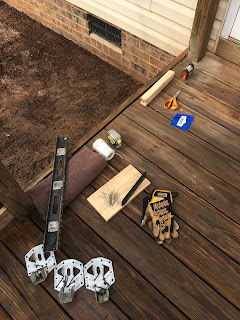 Just like a knitter, a builder must first gather his tools! 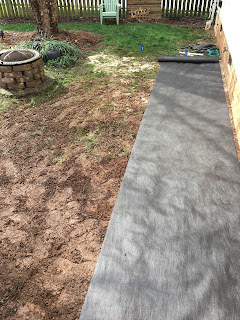 First step was to lay down some landscape fabric over the leveled area. 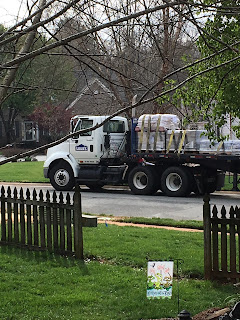 The Lowe's truck showed up with the materials. Everything was ordered online, and the delivery service was exceptional. 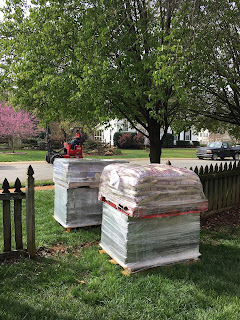 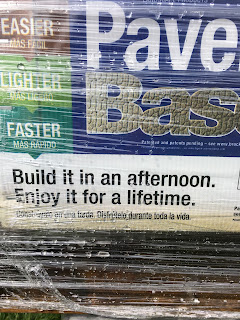 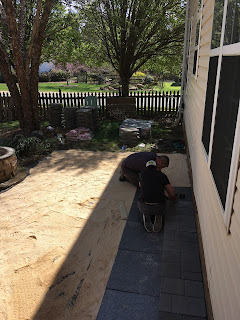 A layer of sand was applied before the first rows of 16" x 16" stone pavers were lined up. 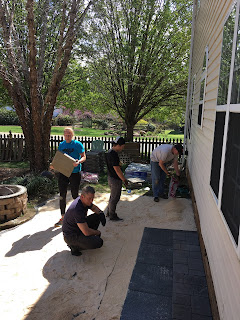 We are so grateful to Steph, Adam, and Zane for their help. It was hard work! 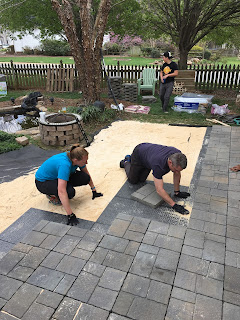 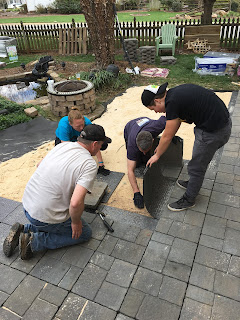 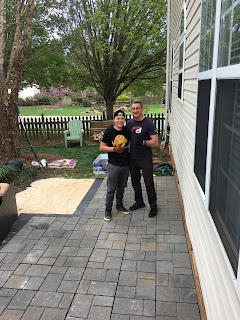 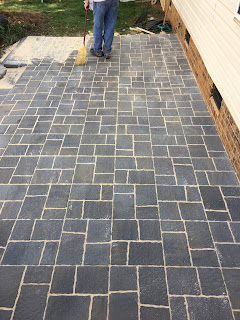 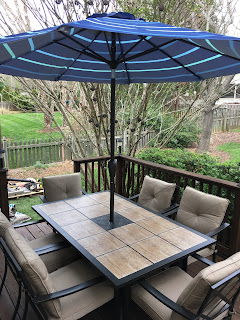 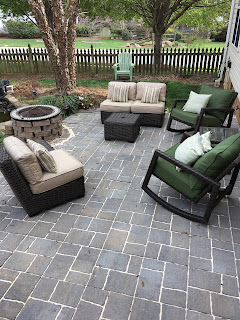 The former deck furniture is now on the patio around the fire pit. We still have finishing touches like lighting, flowers, etc., but the hard part is done. Steve bought a new smoker so he is looking forward to making ribs, BBQ, wings all summer long. I'll post more photos when it is in use!

An interview with myself 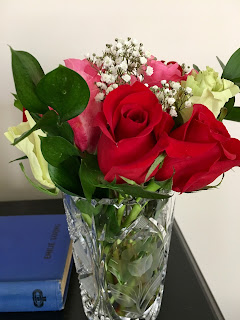 Today I'm pleased to welcome myself as a guest to the blog to have a conversation with me about my new pursuit of bidding on ebay. (Yes, it's taken me 20 years to catch on to the concept.) 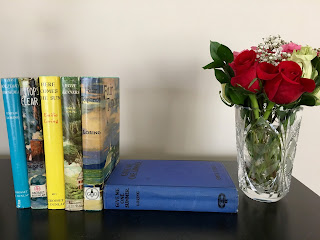 Hello Tammy. Why now? What has sparked this sudden interest in e-commerce bidding?
I was searching for one particular item, vintage books by a specific author, to begin a sentimental collection. 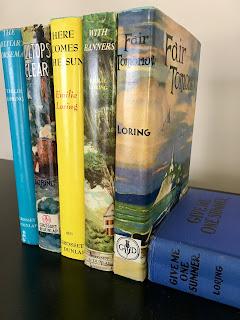 Please tell me more about the collection you are starting.
Author Emilie Loring was a bestselling author in the first half of the 20th century, writing romance novels with strong independent female characters. Her detailed bio, along with the list of her published books are featured on The Emilie Loring Collection website, written by Patti Bender who is also writing a biography, Happy Landings: The Life Behind Emilie Loring's Stories. 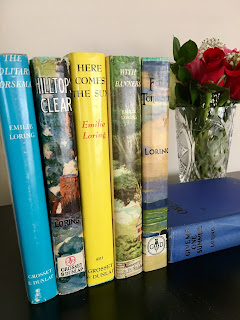 How did your interest in this author begin?
In 7th grade I had started to outgrow the Nancy Drew books and similar series. I ran into a junior high classmate at our rural Wyoming hometown public library who showed me the fiction shelf (in the adult section!) and made the recommendation. I felt so cool reading grown-up books. The books are simple love stories, with independent interesting female characters. 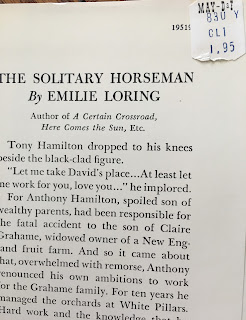 Have you been satisfied with the books you've purchased so far?
Yes! I have purchased six books. All are in excellent condition. My second bid was for a set of five first editions with the original cover jackets. It's almost as if they were put on a shelf and never touched by the original owner. 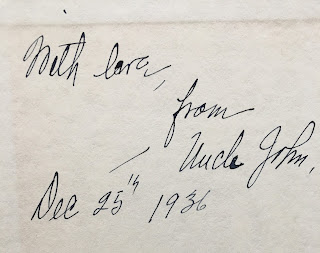 The first book I purchased, Give Me One Summer, published in 1936, has an inscription on the inside cover. Someone who had a very special 'Uncle John' received it as a Christmas present that year. It makes me treasure owning this book even more!

What contributed to your love of reading and writing?
In 1966 when I walked home from my first day of 1st grade, my mother was waiting for me at the end of the sidewalk. She asked me if I had a good day, and I started to cry. I was so disappointed that I had not been taught to read on that very first day. I can vividly remember that scene and my feelings 50 years later.

What are the first books you remember reading?
The Little House on the Prairie series. I love those books. One of my favorite all-time quotes is from Laura Ingalls Wilder:

"Home is the nicest word there is."

I wholeheartedly agree with that! 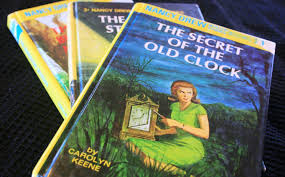 I'm sure I read every Nancy Drew on the school library shelves.


Anything else you'd like to share?
To my family and friends in Wyo and NE who happen to read this: please be on the lookout for library-bound hardcover Emilie Loring books as you visit yard sales and estate sales in your area. 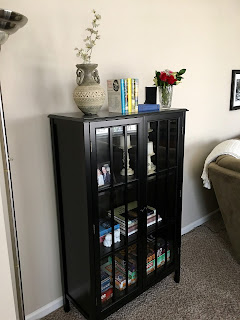 Thank you to my hubby for the beautiful roses in the photos.

So, what's new with you?

A former colleague of mine dropped by the office last week. He left about two years ago to pursue an entrepreneurship opportunity. He's also newly remarried, has moved to a new town, and had all sorts of newsy stuff to share. We had a wonderful conversation, catching up on his life and talking about updates from around campus. Then he asked me,

So, what's new with you?

Ugh! This is such a hard question for me to answer casually.

I haven't seen this guy in a long time, but I couldn't think of one newsworthy thing that was "new with me."

Later, I decided to challenge myself to come up with ten things that were new with me within the past 18 months.

👱     I've started to enjoy sushi. Not anything too crazy, but I can now order it as an entree instead of just sampling it from another's plate.

👱     I no longer watch, read, or listen to the national or local news. It has become too painful and unbearable. It's good here in my bubble. 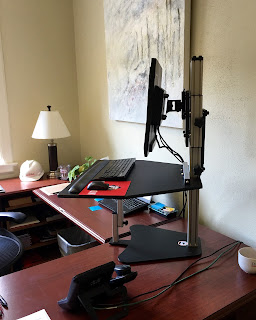 👱     I'm standing more! I have a new gizmo on my office desk called a Kangaroo Pro. It helps make the day go by faster and has taken very little time to get used to.

👱     In knitting news, I learned the cable cast-on for the CM block stitch baby blanket. It makes a beautiful edge. I also added fringe for the very first time, Montego Bay Scarf.

👱     I tucked away all of my knitting projects and bags except for one! I'm returning to just knitting one project at a time. Dedicated, single focused, tunnel vision knitting.

That's FIVE, let's see if I can come up with FIVE more!

👱     I've given up lipstick, sort of. My kids might remember when they were little, the car minivan never backed out of the driveway until my bright lipstick was applied. It was required to go with my career "look" that included a dress, pantyhose, and heels. This was the 90's. Now I'm good with a tinted lip balm or simply Burt's Bees beeswax.

👱     I've unfollowed a bunch of people (including knitters) on twitter and instagram. Radically opinionated people are a turn-off, no matter what flavor they are touting. Thank you to those who post with a sense of humor and love.

👱     Like everyone else, I've adapted to TV binging. It is the only way to watch a series as far as I'm concerned. Some of the recent ones that have obsessed me include Nurse Jackie, Gilmore Girls--both the original and the revival, and right now it's the legal drama Suits. I had never heard of this show until Prince Harry started dating cast member Meghan Markle, who plays paralegal Rachel Zane. I'm hooked!

👱     A young man near and dear to me completed boot camp this winter and earned the title of U.S. Marine. I had never before followed along, corresponded with, and prayed for someone entering this profession. I found it to be so interesting, and I am more thankful now than ever to the men and women who serve or have served in the military.

👱     Oh this is a big one! I opened an ebay account. For the first time. Years ago, Burton, a dearly departed coworker, talked incessantly about his bidding and purchases on ebay of golf clubs, fishing equipment, etc. He made it sound so mysterious and complicated, and it involved another thing I didn't understand, PayPal. I've discovered that it's not that intimidating, so I've taken the plunge for a new pursuit, which I'll share in a later post.

That's TEN!
And I wouldn't share any one of these if someone were to ask me in person.

What's new with you??