Hi there,
I am off from work this week--decided I needed a break and change of scenery from the daily grind. It is a glorious time of year, we are just starting to see tiny changes in the weather, lower temps, and an occasional colored leaf, although most everything is still pretty green.

It feels good to be a homemaker as my full-time and only job for a few days. I accomplished some much needed fall cleaning early in the week. As part of this, we are updating a few pieces of furniture in the family room, and we moved the piano out of that room to the living room. Some call it a formal living room, but there is nothing formal about me or my home. The room is not used as much as others, but it is a lovely quiet spot to take a phone call, read, and now practice playing the piano. 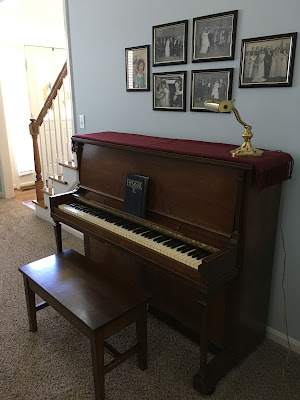 This beauty was given to my mom from her parents as her high school graduation gift in Lyman, Nebraska in 1944. That makes it 72 years old. It's been moved a lot, first throughout my parents 40+ years of marriage, then we had it moved from a storage shed in Wyoming to Knoxville, Tennessee in the early 90's, then to North Carolina. I hope it will always stay in our family, regardless of whether anyone knows how to play it. I took 12 years of piano lessons from first grade to senior year, and I cannot read music and can only play with one finger. What a prodigy, ha! How do you get to Carnegie Hall? practicepracticepractice 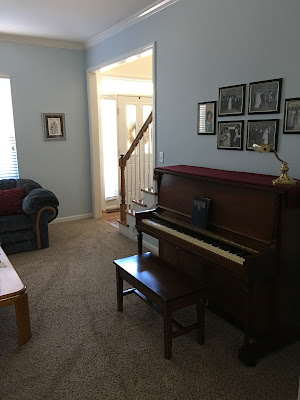 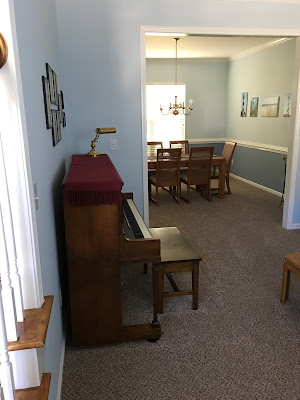 My mom, on the other hand, could play the heck out of that piano, every kind of music except classical. She played hymns, contemporary church music, Christmas carols, honky-tonk, polkas, and any pop song from the radio. 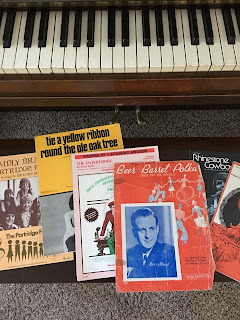 I have all of her sheet music, the piano bench is full, and I have another huge box of it in the attic. Lots of 70's fun. She could listen to a song on the radio and then sit down and play it. She had such a God-given gift, which she used frequently in our hometown Presbyterian Church to accompany soloists and perform with the choir for holidays. I cherish these memories. 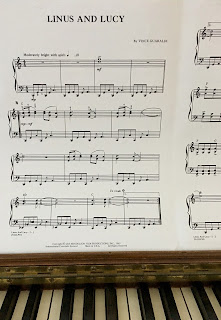 My goal is to learn the Charlie Brown song, to be able to play it gleefully well. 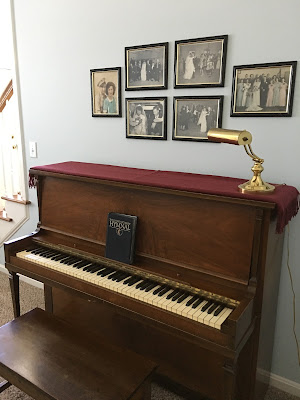 Above the piano are old photos from my parents' wedding in 1947. Dorothy and Fred (affectionately known as Dot & Fritz) were engaged before my dad shipped off to the Philippines in WWII and were married as soon as he returned from his two years of service in the Army. They had a huge two-day Dutch Hop wedding, the kind that was popular in German farming communities like Goshen County, especially in the 40's and 50's. The Dutch Hop is a type of dance and style of music particular to the Germans who immigrated to the U.S. in the late 19th and early 20th centuries from Russia's Volga River region. It's similar to a polka, but has more of a hop to it. A polka band with a dulcimer played at the wedding. If you wanted to have a dance with the bride, you had to pin money on her wedding dress. The German farm wives prepared all of the food, noodle soup and butterballs, light rye bread, garlic sausage, and vegetable beef soup, salads and dessert, and kegs of beer and bottles of whiskey. The cooks brought favorite glasses, plates, or bowls and smashed them on the floor as they danced around the couple. 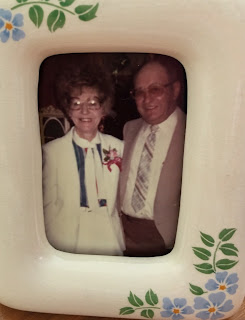 I really hit the jackpot when it came to parents.