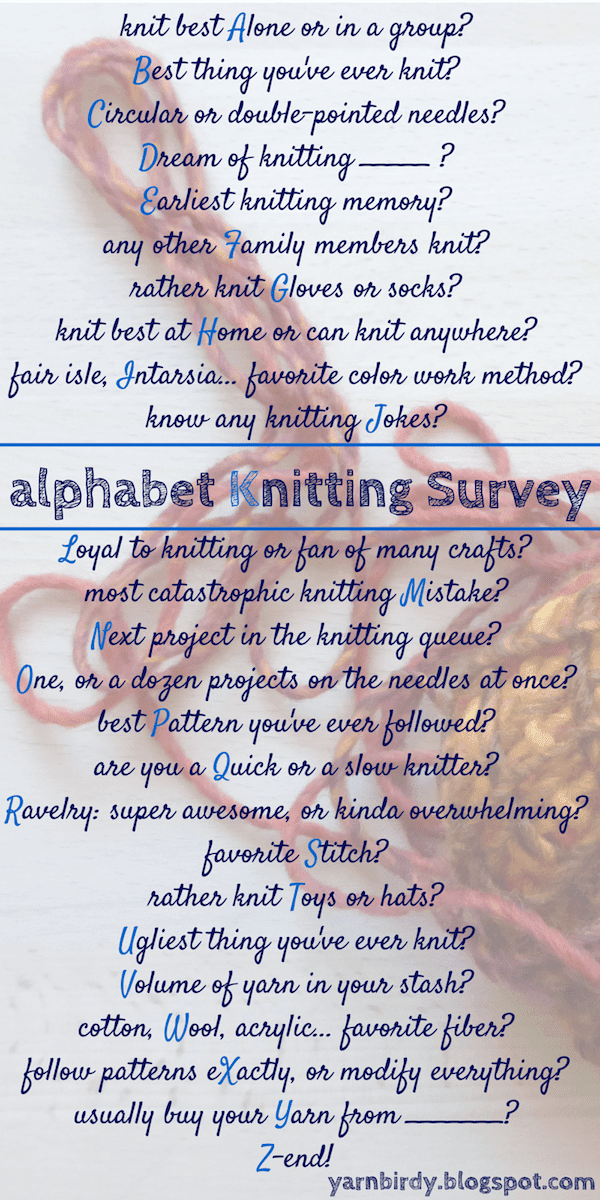 Hi there,
Tracey at Clover posted this fun survey with her answers, which I really enjoyed, so I thought I'd jump on the bandwagon! Here it goes!

knit best Alone or in a group?
Definitely alone! I've tried to join the knitters group during lunch at work, and I get too distracted so I end up frogging any progress I make. I am also very self-conscious about anyone watching me knit. So I often join them, but just chat while they knit.

Best thing you've ever knit?
A soccer player teddy bear for my daughter when she was in high school in her school colors with her jersey #. It was one of the first projects I made, and I surprised her with it. I'm still very proud of and sentimental about that bear!

Circular or double-pointed needles?
I'm partial to DPNs I guess because that's what I learned to work with for the first pair of socks.

Dream of knitting _____?
A lace wedding shawl, specifically Jared Flood's Leaves of Grass pi shawl, as inspired by @kaygardiner. It wouldn't even necessarily need to be for a bride, just a special heirloom.

Earliest knitting memory?
Watching my Grandma Bower knit with brown acrylic yarn in her recliner rocking chair on Sunday afternoons when I was a kid.

any other Family members knit?
Not currently! My grandma knit and crocheted when I was a kid. My mom crocheted beautifully, but did not knit, and my sister also crocheted, but dishcloths only.

knit best at Home or can knit anywhere?
I only knit at home. I've tried to knit in public, with a group, in the car, etc., and I end up getting off track and making too many mistakes. I wish I were able to knit anywhere, any time, but that doesn't work for me.

fair isle, Intarsia... favorite color work method?
I've not attempted color work yet. Too many other skills to learn, but I'll get there!

know any knitting Jokes?
"My biggest fear is that when I die, my husband will sell all my yarn for what I told him it cost!" lol
(not really hon!)

Loyal to knitting or fan of many crafts?
Knitting will always be #1, but I'd like to become at least proficient with crochet, and I am loving the coloring books for adults! Does blogging count as a craft??!!

most catastrophic knitting Mistake?
I'm pretty low-drama, so catastrophic is a strong way to describe it, but early on I made the Purl Soho Super Easy Baby Blanket. Simple garter stitch in seven colors. So the blanket turned out fine, but then I decided I wanted to add an i-cord border, which ended with my first attempt at Kitchener stitch. I totally wrecked it and didn't know enough to frog or fix. I gave the blanket to the cat, but later on threw it away!

Next project in the knitting queue?
I'm going to say the ZickZack Scarf, although I've cast on and knit about 2" of it already, but have a long ways to go! And there's always a dishcloth in my near future!

One, or a dozen projects on the needles at once?
Oh, at least a dozen! I am definitely a process knitter. Seriously, I count seven WIPs in various bags around the house.

best Pattern you've ever followed? The Sunburst Dishcloth, just because I felt so clever once I figured it out!

are you a Quick or a slow knitter?
Slowwwwwwww as molasses!

favorite Stitch?
It's a tie between kfb (knit in the front and back) and knit in the stitch below (bee stitch). Both make me feel smart and advanced!

rather knit Toys or hats?
Hmmm, really neither, but maybe hats for babies or little kids.

Ugliest thing you've ever knit?
Many of my early projects are not documented because it was before I joined Ravelry. But there were many failures, however I'm sure that's true for most knitters!

Volume of yarn in your stash?
Compared to others, my stash is very very small. It's mostly yarn for my WIPs.

cotton, Wool, acrylic... favorite fiber?
I'm very partial to cotton, since I live in a warm climate. But any good quality yarn, especially a dk weight, is much appreciated.

follow patterns eXactly, or modify everything?
Exactly . . . for the most part, I trust the designer and pattern writer. I don't have enough experience to be messing with it.

usually buy your Yarn from _____?
Either my LYS or favorite online stores, Churchmouse Yarns, The Yarnery, and Eat.Sleep.Knit.